XCrypt for OpenShift is a software-only solution built to transparently protect data in OpenShift environments without impacting performance.

Zettaset XCrypt for OpenShift provides a first-of- its-kind, software-only encryption solution that protects containers from data theft in any physical or virtual environment. It’s transparent, easy-to-deploy, and has a negligible effect on performance as it’s software-defined.

XCrypt Container is a first-of-its-kind encryption solution built specifically for containers. Because it’s software-only, it overcomes the typical adoption barriers for encryption – offering a negligible effect on performance and adding no additional complexity to your container environments. Provides a transparent, high performance layer of security for your entire DevOps pipeline. 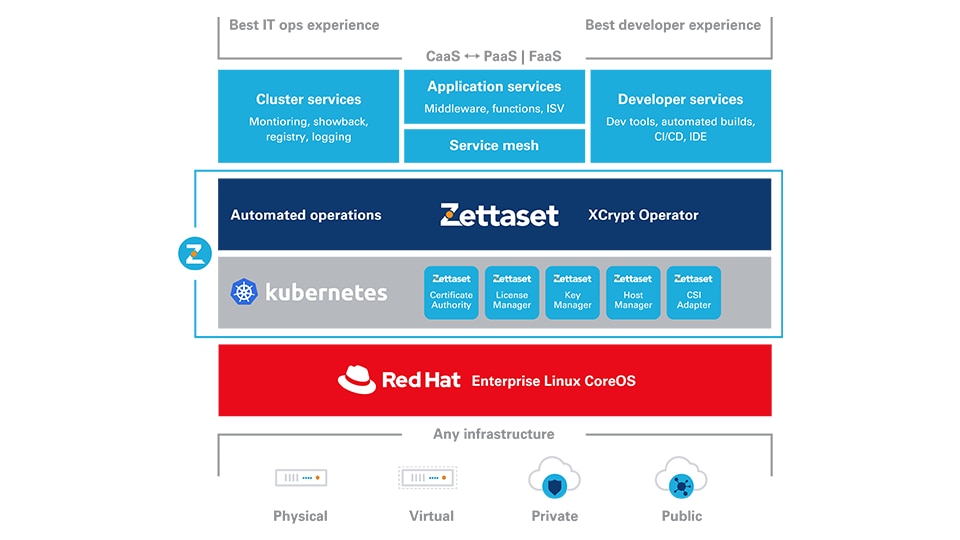 Integrates directly with Kubernetes storage layer and can be deployed without changes to existing processes. There is no need for any code changes. Current applications will run as is after the install of XCrypt for OpenShift. Users and Developers will not be even aware that the data is being encrypted and decrypted. Also users do need not to have cryptographic experience.

Each persistent volume is encrypted with its own unique key. This provides enhanced level of protection especially in multi-tenant environment: one compromised tenant system does not expose the entire environment.

Data sheet contains high level information on the details of the product components,deployment and describes how the solution meets performance and compliance by encrypting data at rest for RedHat OpenShift.

Container Data Protection for Startups and Tech Companies - Use Case

XCrypt Kubernetes provides a transparent, high performance layer of security that will not only protect one of your most important assets no matter where it resides, but also help your organization efficiently transition from DevOps to DevSecOps.

Encrypting data in Kubernetes deployments Protect your data, not just your Secrets.

The DevSecOps migration has many steps and Secrets is a good start, but it only provides storage and management of sensitive information such as passwords, tokens and keys. What about the data? Data encryption is a fundamental security requirement.

Join Zettaset for a deep dive into the issues surrounding protecting your container-based data and how to defend it against an ever-growing landscape of security threats and attackers.

Visit the homepage of the software provider.